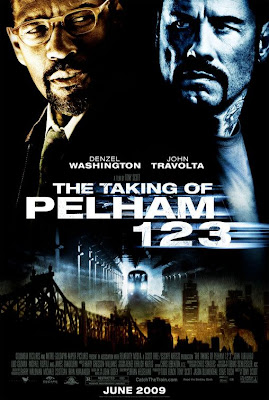 The original Taking of Pelham 123 was an interesting and extremly underrated movie that was a joy to watch but lacked that memorable umph factor. 2009's Taking of Pelham 123 is a prime example of a GREAT remake that also has the umph factor that the first lacked. And that umph factor is called John Travolta. While I dont want to take anything away from James Gandolfini or the always great Denzel Washington, but John Travolta takes a mediocre story featuring a overused plot device and turns it into a great and extremly well told story with a unique plot device. Then again when you get Tony Scott what more can you expect except greatness.

The Taking of Pelham 123 is about the title: the taking of the pelham 123 subway by a group of vigilantes led by John Travolta. When an MTA dispatcher played by Denzel Washington gets ahold of this, its up to him to talk and negotiate with Travolta while police try and secure the subway. Its not a very complicated premise but the film gets complicated quick and its a very well told edge of your seat thriller.

I have never considered John Travolta a great actor. I would go so far as to say I havent really liked many of his performances despite liking the movie (Wild Hogs, Pulp Fiction, Grease). Its nothing AGAINST him, in fact I think he is a great guy and I would love to meet him but his acting style usually included one thing and one thing only: being a suave, cool guy with a surfer voice. While he has definetly grown in just the past few years, he has never really grabbed my attention until this movie. Travolta, bouncing off of the TRAGIC death of his son Jett, takes all that pent up rage, frustration and sadness and pushes it out onto this film. What we get is a brilliant performance that SHOULD get nominated for some kind of award. He oozes charisma and a wicked humor while hiding a dark and violent underbelly. His performance alone made me sit through this movie in awe.

Denzel is great in this movie taking a more toned back approach compared to his other movies playing an everyman. He isnt built, he isnt smooth, he is just a glasses wearing, simple clothes wearing, middle class citizen doing his job who gets stuck in an extraordinary situation. But even though its a very reserved performance its extremly well done and really fun to watch. Its especially fun to hear his back and forth with Travolta as its very boom boom boom back and forth.

Its an underrated thriller but a great thriller that is a great edge of your seat movie with phenominal acting and a well told story. Definetly worth a pick up