You're my best friend...I just need to get a picture of you 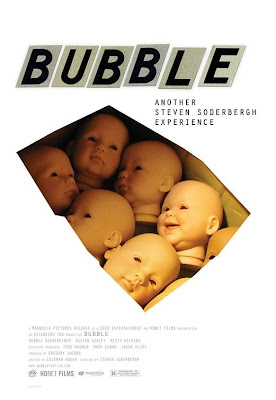 In my seemingly unending quest to see every movie directed by Steve Soderbergh, I had to come across his more out there indie films which have been nicknamed "Soderbergh experiences." Usually running between 70 and 90 minutes these films are short, sweet and to the point, usually only featuring three or four prominent actors. They are extremly low budget but shot with an HD camera (note one camera). The first of his experience films was one simply known as Bubble. Don't ask why because its never explained. Unlike some of the other "experience" films (Girlfriend experience) its not really explained. But luckily the creepy poster is.

Bubble is about a woman named Martha who lives in a small Ohio town and works at a local doll factory. Martha takes care of her sick, elderly father with whom she lives with. She has one friend, Kyle, who is much younger and lives with his mother. Kyle works on head design for the dolls and Martha works on airbrushing and design. One day a new girl Rose comes in to work at the factory but two days later is murdered in her house.

That's really the extent of the non spoiling plotline. Its only 73 minutes long and the climax doesnt happen till the 43rd minute but still it has a pretty good build up. Maybe it comes from having no script. Yes thats right, no script. The entire movie was cast with random people (Martha works at a local KFC in the area), no script (just an plot outline), used one muscian (a local artist named Robert Pollard...who does a good job) and was directed, shot and edited by Steven Soderbergh. It has a very low budget feeling and almost feels borderline documentary. But the true talent lies with the actors abilities to craft a good story with no real direction. It has a bit of a dull tinge to it and you do wait a bit for anything to ACTUALLY happen but the last half an hour or so are extremly interesting and make this movie definetly worth watching.

Yeah it has no great big actors or a truly engaging plot, but Soderbergh does a great job and along with the great music and acting from mostly first timers, its definetly a film worth checking out.