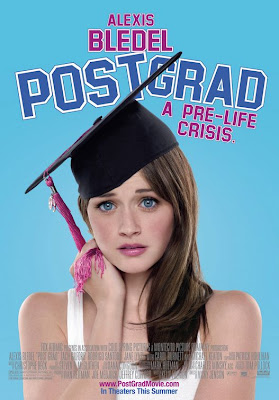 I had an interesting experience at the theatre with this movie. Oddly enough I wasn't seeing this movie but instead seeing a different movie. The experience happened AFTER I was done with the movie. My friend and I were walking out of the theatre (not the building but the room they show the film in) and walked right by the concessions stand. Right next to the concessions stand was the projector room for the left side of the theatre and the projector storage room where they keep the film rolls. Now I am a huge movie fan but havent really seen a movie when its just in the can. Ive seen and own a few film reels but Ive never seen a NEW FRESHLY CANNED film reel. I was intrigued and so I walked over to the four freshly canned film reels (yay security) and picked one up. I twirled it around to see the title and lo and behold it was Post Grad. Now thanks to a giant frying panned to this film's face I never saw this film. In this economy I cant afford to see every movie...although I DO NOW. But still I was intrigued nevertheless and after a few more minutes of looking at it and contemplating taking it (once again yay security) I used my better judgement, put it down and talked to the manager about leaving their film canisters out in the open.

But that has nothing to do with this film. Honestly I just needed filler for this review. While this is not a disaster of a film, actually a pretty decent film, its not really that deep. Ryder (Alexis Blidel) is a straight A student who graduated with honors in high school and now in college. She has a "plan" that if she did really well in high school and college that she would get her dream job as a book publisher at the biggest book publishing agency in New York (im guessing). Things don't quite work out the way she wanted to with the job and so she moves back in with her parents and tries to figure out where to go from there. That's about how deep the plot goes. Mostly its whining and flirting and trying to get different jobs and ultimately get the dream job. But Alexis Blidel makes it all better and you really don't notice the lack of depth.

The cast is surprisingly good in this movie. Blidel is cute as always. That's something I have always enjoyed about her is her perkiness and overall happiness she always seems to have, even when she isnt happy. She IS a good actress (watch Gilmore Girls) and she really does a good job with this film. The other interesting people in this movie I notice right away is Michael Keaton and Carol Burnett. Keaton, if you remember, was the second Batman (after Adam West) and was Batman for two movies. A lot of people argue too that he is the second best Batman, after West that is. Burnett is a legend and its always a joy to see her and she delivers in this movie. The only other standout was Jane Lynch but since she's been so prominent on Glee she seemed pretty toned down in this movie.

Its a chick flick...nothing more nothing less. The film was written with a niche in mind but its cute if nothing else and you could do a lot worse with 80 minutes.