NOT PERSONAL!? That is my WORK, my SWEAT, and MY TIME AWAY FROM MY KIDS! IF THAT IS NOT PERSONAL, I DON'T KNOW WHAT IS! 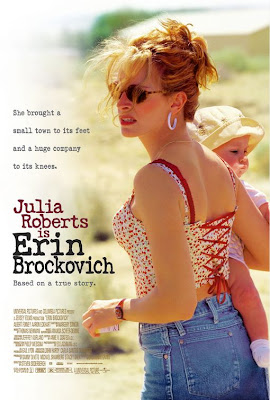 Hello again, here with another Sodenbergh film but luckily its one of his best. Released in 2000 and starring Julia Roberts and Albert Finney, Erin Brokovich is based on the true story of a woman who took some power and with that power took down one of the biggest companies in California and her struggles as a young mother with relationship issues.

Its really a simple life story when you get down to it. There isnt any huge revelations or twists or anything, just the simple story of an extraordinary woman. Julia Roberts plays the title character in this film and she is amazing. She embodies Erin Brokovich to the core. I think even the real Brokovich (who has a cameo IN the movie) was probably surprised at how similar they looked and acted. She is simply brilliant in this film and really deserved the Oscar she won for it.

Erin Brokovich is 130 minutes long but really feels like only about a half an hour. It moves so fast and the story progresses so smoothly that it feels like no time has passed. It feels like you are watching someone's life unfold on screen. Soderbergh does an amazing job in this film and its definetly in his top three films he has ever done.

Its a great movie and probably one of Soderbergh and Roberts best movies they have ever done.