You know how I said you could thank me later...it's later 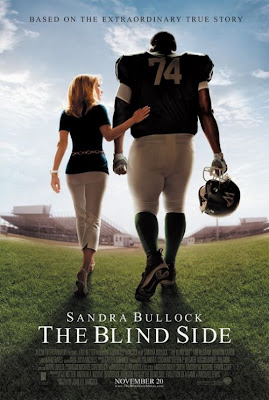 It was a strange event. Warner Herzog's new film Bad Lieutenant wasn't playing at my theatre, the crowd was massive for New Moon with lines going around the theatre with little to no parking whatsoever. Cops were all around in full force and the lines to get into the auditoriums were massive. I had already seen New Moon however so I was game for one of two movies: Precious or this. My friend who I usually see movies with, The Buisness Guru (link on the sidebar), had gotten tickets for this thinking it would be the better movie. So after pushing through the mass hysteria that was the New Moon crowd and finding the one theatre that wasn't playing 2012 or New Moon somewhere shoved in the back corner we walked into this movie, The Blind Side. To my surprise the theatre was packed to the roof. Every seat was taken in the entire auditorium and there was little or no elbow room whatsoever. I thought to myself "Why are so many people seeing this movie, a movie that while decently reviewed, has not recieved the box office acclaim of 2012 and New Moon already?" After walking out of The Blind Side I knew two things: 1. It was packed because it was an amazing heartwarming movie and 2. If I see Precious it better be damn good because it has some stiff competition.

The Blind Side is Sandra Bullock's new movie. And before you stop reading she actually does GREAT in this role. I would even go so far to say its Sandra Bullock's best film. But either way...The Blind Side is based on the book The Blind Side: Evolution of a Game which tells two stories. One is the story of how Lawerence LT Taylor changed the history of football by making left tackle one of the most important posistions in football. The second is about Michael Oher, the current right or left (depending on player availability) for the Baltimore Ravens. It tells the story of how with the help of Sean and Leigh Anne Tuohy, went from a kid in the ghetto with bad grades and no hope, to a star athlete with good grades and a sports scholorship.

Leigh Anne is played by Sandra Bullock. Leigh Anne is a southern spitfire who doesn't take crap from anyone and is a card carrying member of the NRA. Bullock is quite moving in this movie and balances humor, seriousness and a great delivery in this movie. She is brilliant. Sean Tuohy is played by Tim McGraw...yeah...country music sensation Tim McGraw. But you would NOT be able to tell that in this movie. Full head of hair, no facial hair, put on a little weight and without an accent. When I saw who it was that was playing Sean I was blown away. It was a Heath Ledger is the joker REALLY???!!! moment. But he is great in this movie. The definite star in this movie and who I wouldn't be surprised seeing get an Oscar nod is Quinton Aaron as Michael Oher. Quinton's only other role was a supporting role in Be Kind Rewind but otherwise this is his only other movie and definetly his first major starring role. He is so touching, so moving and just wonderful in this movie. You cheer for this man and I felt deeply for him.

I think my only major complaint with this movie is it takes about twenty minutes to really get going. Its a two hour, six minute movie so they CAN do that but it is slow in getting started. They spend a lot of time introducing all the characters in great detail but once all the major character development has set in, the film really starts moving fast and it keeps you engaged, absorbed and drawn in the whole time.

Even if you hate Sandra Bullock or even if you hate sports movies, this one stands alone as the best feel good movie of the year. Its touching, its moving and its brilliant. Expect this one to get some nominations soon.