This is it...this is my final curtain call 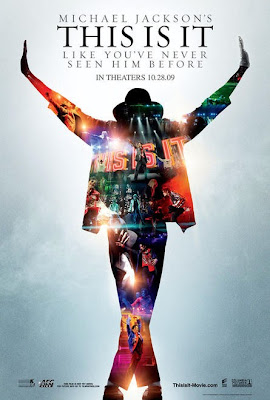 It was a tragic day when Michael Jackson died. It didn't matter what he may or may not have done or what he looked like he was still a master of his craft with a great voice with a huge range and dancing skills that nobody has been able to ever match. A member of one of the greatest child singing groups of all time, The Jackson 5, and a huge catalogue of music with albums that are considered some of the best ever made (he even holds a Guiness World Record) and music videos that play out like mini movies. Whether or not you liked him, he was a master and when a master falls it is a sad day indeed.

This is It was the name of his comeback/final tour that was completly sold out and was going to start in July of 2009. They got the best dancers in the world, a phenominal guitarist, a great band, video extravanganzas with redone videos of Earth Song, Smooth Criminal and Thriller, great Pyrotechnics, wonderful guest acts, it was going to be one of the biggest, if not THE biggest concert series ever. But in June when Michael was murdered by his doctor using a lethal drug cocktail everything came to a halt. But tour choreographer and director Kenny Ortega (of High School Musical fame) captured hours and hours of rehearsal footage that was going to be sold at the concerts and be a nice Behind-the-scene look at the concert. Well Ortega (with permission) took this footage and turned it into a two hour concert/backstage film aptly titled This is It.

The first thing I enjoyed was seeing Michael. He never looked weak or tired and there was no sign of abuse if any kind. Even at 50 he was keeping up with the young dancers. Michael is very soft spoken in the movie and never complains. Even when he points out errors or issues he does it "with love". Michael was a very kind person and it shows in this movie. Its also a nice note that besides the opening title roll, his death is never mentioned. He is there and thats all thats important to the movie. It focuses on this concert and nothing else.

The music is great and it varies showing all of my favorite songs. If you are an MJ fan there is at least one song that will make you extremly happy to hear. The only issue is Michael is conserving his voice for the most part and at one point biffs the whole song and just stops it. But for Human Nature, Black and White, Earth Song and Thriller he really does belt it out. But for the most part his voice is pretty conserved. That may be an issue to some and it bothered me a little but he was really trying and when he belts it, HE BELTS IT. His dancing, including the famous Thriller dance, is all in there and still strong. In a lot of ways Michael was dancer first, singer second.

Its not the best documentary ever made but it is extremly entertaining to watch and see Michael one last time. For fans of MJ this is a must see and for non fans and haters it will definetly silence you.