I don't know why people who have not been on rockets continue to ask, "You're not scared?" No, we're not scared! Until something happens, then it's ti 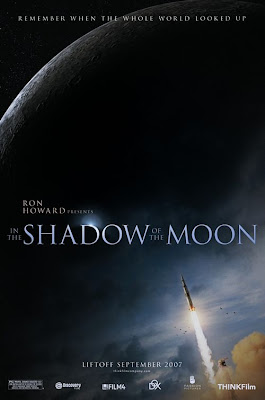 Hello I am the movie encyclopedia and if no one else will see it, I will.
Everyone remembers July of 1969 for one reason and one reason only, the first time a man was on the moon. The names of Buzz Aldrin, Lance Armstrong and Michael Collins are household names because of it and the quote "One small step for man, one giant leap for mankind" is a well remembered quote that everyone of every generation knows. But if you were born in the 90s or above like me than you probably have HEARD but have never SEEN the landing and the events leading up to it. Well Ron Howard and other British filmmakers felt that the footage should be remastered and the stories retold with archive footage and interviews with the people who were there including Aldrin and Collins among others. What we get is a great documentary that is definetly worth a see called In the Shadow of the Moon.

In the Shadow of the Moon is an extremly well made documentary that is great for people like me. It shows the evolution of the NASA program and the events, including the launch, of Apollo 11 as well as the events of the infamous Apollo 13.
The stories are well told and its great to hear first hand accounts of what space is like and what the moon is and what being on the moon is like. All of the people are interesting to listen to and never drone on and are never boring. In fact some are quite fascinating and pretty funny.

If you were born in the 90s or higher or have never seen this stuff before than you definetly need to see this movie. If you arent interested in documentaries or arent interested in rockets or the moon landing then this probably wont change your mind but its still worth seeing.
MY VERDICT: SEE IT
Posted by xTJMac510x at 1:46 PM