"You ladies ready to play a little Ultimate Frisbee?" "I think so Mr. Testosterone!" 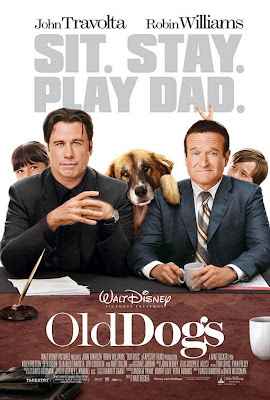 I really feel my tagline is pretty true today. Old Dogs, the new kids comedy from Disney, has been pretty much panned by every single critic out there almost getting worse reviews than All About Steve and critics have even gone so far as to say to NOT see this movie at any cost. Me, I'm an optimist and honestly I went into this movie with bad expectations. If Roger Ebert, the guy who gave 2012 a good review, says that this movie sucks the big one, you are probably going to have some pretty low expectations. So with my head hanging low I walked into what I thought was going to be a giant dog turd and lo and behold it was not a turd...but a small diamond hidden in a lot of turd.

Old Dogs follows the story of two best friends Dan and Charlie (Robin Williams and John Travolta), a couple of hotshot sports advertisers who do a lot of work with major Hollywood and sports celebrities. They are on the verge of a big sale with a large Japanese company when Robin Williams one night stand Vicki (Kelly Preston) shows up, says she is going to jail for two weeks and needs someone to watch her kids...and their Robin Williams' kids...boy imagine his shock when he learns he has fraternal twins. So Dan and Charlie make an effort to take care of these two kids for two weeks while juggling this big deal that could be their biggest hit.

Old Dogs is a tough one to rate. The laughs are pretty juvinile and they do play the "two dads haha your gay" joke a couple times as well as the "haha they are old so they must be grandparents haha" plenty of times. There are fart jokes, sight gags, pee jokes, pill switch up jokes, they have all been done before and done way better but at the same time it made me laugh. Its PG humor. And honestly for a Disney branded PG movie it got more laughs than I expected. Usually with PG comedies or these recent Disney comedies they are useless pieces of garbage and a waste of good film. But this one actually proved different.

Maybe it was thanks to Travolta and Williams. Williams is extremly dialed down in this but he still provides plenty of laughs. The same goes with Travolta. While I have never been a big fan of Travolta's comedy work, this one along with Wild Hogs proves that he CAN do some good comedy films. This film is rifled with plenty of other stars though. Bernie Mac (RIP), Matt Dillon, Justin Long (in a surprising role), and Seth Green fill out the main cast and each of them provide at least one big laugh out loud moment.

Its no award winner and in the end its a mildly amusing movie. In these days with Role Models, Tropic Thunder, I Love You Man ect. which are filled with dirty raunchy humor it IS kind of nice to see a decently done comedy for kids that parents can laugh at as well. While there ARE plenty better comedies I had a fun time watching it and its at least worth a rent.

Email ThisBlogThis!Share to TwitterShare to FacebookShare to Pinterest
Labels: kids, Rent it