There are four kinds of alien encounters. The fourth kind is abduction 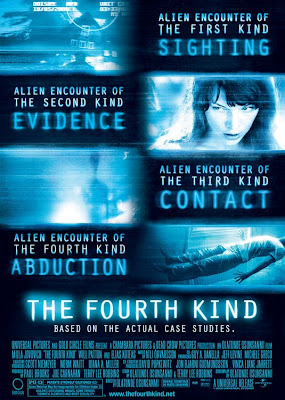 Did you like Paranormal Activity? Blair Witch Project? Cloverfield? If you answered no then quit reading this review right now.

If you are still here, The Fourth Kind is a strange mix of all three of the aformentioned movies but with sci fi alien elements. Based on "actual case studies," the movie follows Abby Taylor, a psychologist who is doing studies on people suffering from insomnia. The one thing that strikes her as interesting is that when she puts her patients to sleep and asks them what they see, they all have visions of the same owl (i put a picture here of the owl sighting)

But once they actually get deeper into the story of what they see/saw, most or all of the people flip out. Long story short, if you've seen the previews then all of the spoilers for this movie have already been given. They spend a good hour talking and explaining their stories and what the owl could mean before they get to the big reveal: that they are aliens! It says they are aliens IN the trailer, ON the poster, everywhere. That owl is nothing more than a close up of an alien face. So the big spoiler/money shot moment for this film has been given to you. So for the most part I kind of felt cheated. They spend all this time talking and Im sitting going, "When are the aliens coming?" And then when they pull the whole "OMG THEY ARE ALIENS!!" everyone in the audience is like:

The worst part is the aliens are total jerks and they never explain why! Explanation would definetly be neccessary but the director and writer must have figured that the big ALIENS!!! reveal would have been enough....someone doesn't watch trailers.


The story (albeit pointless and completly spoiled already), is told in two different ways: the first way is using "real live footage" and "real tape recordings" of the occurances, and the other using actors for reenactments of these events, with special effects and everything. The real life one feels like an okay Blair Witch Project/Paranormal Activity with aliens ripoff. The people ARE actors and none of it is actually real but they play it off like it is. However the real life footage is WAAY better than the overpriced reenactment version featuring Mila Jovovich and Will Patton. Its as cheesy or even cheesier than the real life and sometimes to prove that point (unintentionally) they will play the two side by side.

Now I would have appreciated it if it would have just been one or the other. The real life footage only would have been kind of a cool Paranormal Activity esque sci fi film. Not good but not an abomination. Or if they would have gone all Hollywood it could have had the possibility of being a cult classic or so bad its good but put them together and you got a mashed up piece of crap film.

Don't see this movie. If anything see Paranormal Activity again. Except this time think that the demon is an alien. It will still be better than this...