Not one, not two, but THREE BRUCE LEE'S!! 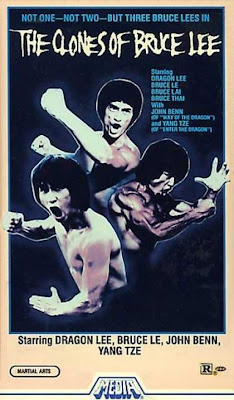 Now I don't know about the rest of you my dear readers but Bruce Lee has always been a favorite of mine. He is regarded as one of the greatest, if not the greatest martial artist of all time. Now a lot of people would argue Chuck Norris is better but as awesome as Chuck Norris is...Bruce Lee did kill him in a one on one fight. So obviously Bruce is the better fighter. Although in retrospect Chuck Norris is still alive and not dead for many years so while Lee has the better fighter thing going for him...Norris is still alive.

Oddly enough however death did not stop Bruce Lee from making movies. Yes like Tupac and his yearly record releases, Heath Ledgers films or the reprints and latest movie releases from Michael Jackson some of the greatest don't let death stop them. Although some of the after death movies are ones the REAL Lee worked on but never finished, most of them use lookalikes to fill in his missing parts...or just use the lookalikes period and call them Bruce Lee. This spawned the era of the Bruceploitation martial arts films. Now being a sucker for martial arts movies I happened to watch most of these Bruceploitation films and even my favorite internet personality Noah Antwiler (Spooney) has reviewed one of them...my favorite one actually. This one goes beyond the realms of possibility and beyond any reasonable explanation but it still came out. The sad thing? It came out overseas as well as over here too. But thanks to some importers, years of looking around in Ross's (supplier of Kung Fu movies and rip off clothes) and just youtubing everything I was able to watch this entire mess from minute one till the end. And let me tell you something: THIS IS BAD....like PLANET 9 bad...like THE ROOM bad. But while I do give it my lowest score possible I do have to say that it is actually pretty fun to watch.

The Clones of Bruce Lee has a very paper thin plot but I might as well explain it. You see Bruce Lee has just died of a heart attack. What's the first thing they do? Clone him using experimental FBI technology thats what. Because while just using this technology would probably benefit the advancement of medicine....lets use it to clone Bruce Lee. Why clone Bruce Lee? To use him for governmental missions.

Yes use them for missions. What are the missions? Stop a gold smuggling movie producer by pretending to be an actor...stretch...stop a crazed doctor who invented deadly Raid....odd...and stop a mad scientist...okay this was throw a dart at random sticky notes and call it a plot.

But for its lack of plot this movie makes up for it with hillarious dialogue (not on purpose) over the top kung fu and topless chicks. Yes topless chicks.

This movie is by no means good but if you like cheesy, campy martial arts movies than this is actually pretty good. Its fun to MST3K and its just fun to watch and honestly there have been worse kung fu movies. But, like the Room and P9FOS, it IS a horrible movie and does deserve the bomb...

Email ThisBlogThis!Share to TwitterShare to FacebookShare to Pinterest
Labels: Abomination to cinema, action