Nature is about balance. All the world comes in pairs. Yin and Yang. Right and Wrong. Men and Women. What's pleasure without pain. 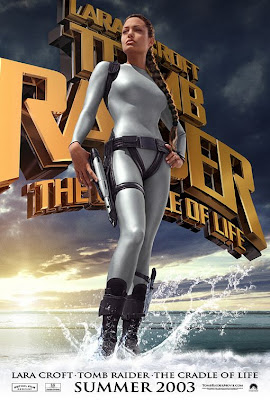 Now Im pretty ashamed to admit it but I actually kinda liked the first Tomb Raider movie. Yes it had its major flaws, a disregard for any consistancies with the game series, and it was mostly just eye candy but it was exciting and fun to watch. When I heard they were making a sequel I was worried. The first movie was okay but not worth making a sequel for. Lo and behold The Cradle Of Life came out and whaddya know...its better than the original. Maybe its because it has a more coherant plot, or maybe its the better action, or maybe its the fact Gerard Butler is in it and really makes the movie GOOD. Either way this one outshines the original by a mile and was quite fun to watch.

The story of Cradle of Life follows Lara Croft (Jolie) as she is hired by MI6 to find Pandora's Box. The key is hidden in the Cradle of Life, a mysterious orb that holds a map. When its stolen by Chen Lo, Lara finds Terry Sheridan (Butler), a mercenary who is great at tracking people. Over the course of the movie and in between countless action scenes they try and hunt down Chen Lo and find Pandora's Box.

The acting and directing is much better in this film. Jolie is still good but Gerard Butler blows Daniel Craig's wooden performance right out of the water. Jan de Bont, renowned Dutch filmmaker whose claim to fame here is Speed 1 and 2 and Twister, directs this film making it feel much tighter and faster paced than the original. The action is good and while the writing is subpar, it gets the job done.

While no award winner it is leaps and bounds better than the original and provides a decent Indiana Jane like film that does SOME (not much but some) justice to the original game series. At least worth a watch in my opinion.