A story about love that's taking on a life of its own. 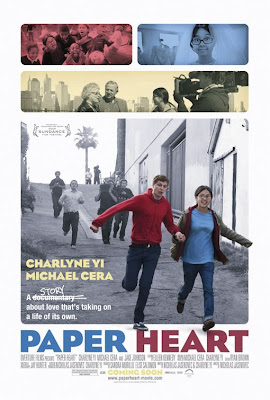 A lot of people spend their lives asking what love is and rarely do they ever get an answer. That's because love, true love, is hard to explain it just happens. Well one comedianne decided she wanted to figure out what love really is and that is the basis of Paper Heart.

Paper Heart is the story of a young comedianne/musician named Charlyne Yi. Yi is a pretty popular stand up comedian and pals around with comedians such as Dimitri Martin and Seth Rogen. She has a pretty succesful career despite not making that much money but one thing has always eluded her: love. She says in the beginning she thought she was in love once but that that guy turned out to be on drugs. Since then she hasnt had a boyfriend and has really given up on the idea that love really exsists. So with Nick Jasenovic, film/documentary director and one of Charlyne's best friends, she goes out to find what love really is. Shortly after filming begins she meets Michael Cera, who falls for Charlyne pretty quickly.

Its then the film turns into a bit of a romantic docucomedy. Thats one thing I think I couldnt figure out about this movie. Is it a documentary or is it a mockumentary? The acting seems really unscripted and raw but at the same time it has a lot of comedic mockumentary Best in Show kind of moments. The line is almost a little too blurred for my tastes.

The only other glaring issue to me is the two protagonists. Charlyne is infectious and pretty funny at times but for the most part she comes off as a bit high strung and dull at times. She means well and there are some really sweet moments but some times she isnt interesting to watch. The same goes for Cera. Cera is a good actor I think but in a more natural enviroment he tends to not shine as much. He kind of sucks at playing himself, which is quite odd.

Despite that though, Paper Heart is a really sweet docucomedy that leaves you feeling kind of warm inside. While not that interesting and lacking some serious punch, it leaves you satisfied in the end and is at least worth a rent.

Email ThisBlogThis!Share to TwitterShare to FacebookShare to Pinterest
Labels: documentary, Rent it