Also that mix CD... uh that I left on your doorstep was the last one that I'll be making for you. More or less... 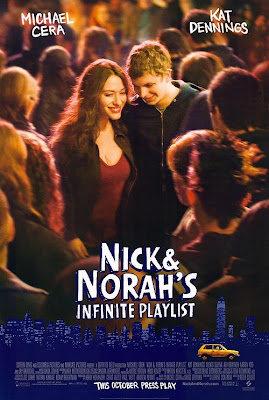 
Ahh quirky romcoms. They seem to be popping up like mad ever since Juno came out. Once Juno entered and became a hit, studios seemed to jump on any chance they could to make a quirky romcom. More often than not a lot of them failed or faded into obscurity. But one movie seems to have stuck in our hearts and minds and although not as good as Juno it has that quirky element that we all love. What is this film? Nick and Norah's Infinite Playlist.

NaNIP is the story of Nick and Norah. Nick is in a band called The Jerkoffs, an all gay queercore band (although he is the only straight guy), and has just recently been dumped and cheated on by his girlfriend Tish. Nick is a hopeless romantic, sending custom mixtapes and album covers to Tish hoping that she will take him back. But while he IS heartbroken he does love his buddies and decides that he WILL play at the local club nearby, if nothing more than to play music, his real one true love. Meanwhile Norah is an straight-edgy pop/punk/alt goth/emo/scene chick (a lot of things could describe her) who loves music as much as anybody. It helps since her dad owns a record company. She attends the seemingly all girl catholic school with Tish who ends up giving her all of Nicks mixtapes. Norah's friend Caroline wants to go drinking so they all head to a bar where this band the Jerkoffs are playing. After the Jerkoffs set, Nick goes off in a mopey huff and when Tish arrives at the bar, Norah goes to Nick and pretends to be his girlfriend. From there they hear an announcement that Where's Fluffy, the apparently GOD OF MUSIC (cant explain it otherwise, is playing and noone knows where. What ensues is a quirky romcom plotline involving Nick, Norah, music and searching.

The acting is good enough. I cant stand Michael Cera (Nick) honestly. He IS a good actor but he really seems too one dimensional for my tastes. He always plays the quirky, quiet, quippy guy. But he does well enough and gets punched in the throat so I am happy. Kat Dennings (Norah)does well. She is soooo white and looks so gothy (beet red lipstick and black hair) but she is sweet and quirky and funny so she does well as herself. I will say the big laughs I got from the film came from the Jerkoffs and Caroline. The Jerkoffs were hillarious and werent just gay stereotypes. They werent effeminite or sissies but just party dudes who liked to drink, laugh and have fun. Caroline is drunk for 99% of the movie and so watching a drunk chick stumble around IS pretty funny.

If you liked Juno than you'll like this but if you dont like the quirky/indie kind of romcoms than this probably wont change your mind. But I was entertained for 90 minutes so it did its job.