The Feather Makes It Gay 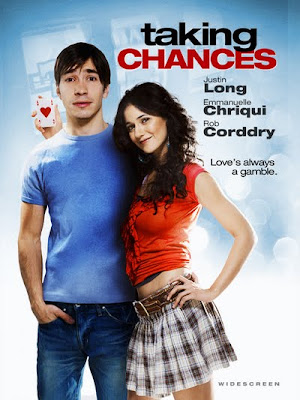 After Vetran's Day I still felt a little more patriotic than usual so I did my usual "random movie I've seen close my eyes and pick one" method and out popped this patriotic romantic comedy called Taking Chances (renamed Patriotville for some reason). Taking Chances is the first film from social activist Talmage Cooley and comic book writer Annie Nocenti and it proves to be an interesting, if not groundbreaking, comedy.

Taking Chances is the story of Chase (Justin Long), the owner of the Patriotville historical museum. Chase is the owner and main curator of the museum and gives all of the tours himself mostly. And despite a lackluster turnout at the museum its his baby and he loves his job. His sex crazed buddy Digger (Keir O' Donnell) is his only friend and wishes he would just quit. On one fateful night two people come to Patriotville: the first is a group of indians hired by the corrupt mayor to build a casino to earn the town some money and the second is Lucy (Emmanuelle Chriqui), a drifter who befriends Chase on her first night there. When Chase learns the casino is being built right on top of his museum he stands up for what he believes in and protests.

Its a pretty formulatic story that we've seen hundreds of times but its actually pretty fun to watch. Ive always thought Justin Long is hillarious and has amazing timing but usually gets shoved in the sidekick position. It was nice to see for once that he was getting the front man treatment and he really shines in this movie. Performances from Rob Corddry and Nick Offerman as the mayor and town sheriff provide great comedic moments with Corddry really shining as the main antagonist. The only person that really stuck out as being really bad was Emmanuelle Chriqui. Most people know here as Sloan on Entourage or the hostess from waiting but she doesnt really do much besides look pretty in the movie. Its not that she's a bad actress in this movie its just that she really doesnt add anything to the story and really just comes off as a huge bitch in the movie making her totally unlikeable, which is what the movie is trying NOT to do. Its like trying to get someone to like a pitbull with rabies...it doesn't happen.

But besides that this movie is a decent enough comedy. Formulatic to a tee and as predictable as old faithful but Justin Long and Rob Corrdry really bring the comedic shine making this at least an enjoyable rental.