Trapped behind enemy lines. All they have is their hope 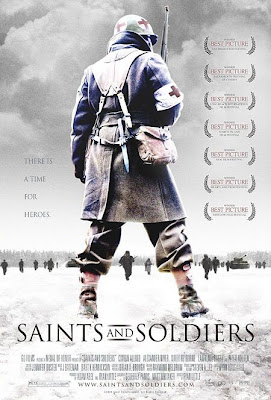 War movies seem to be a dime a dozen these days. Most of them NOW focus on the first Iraqi war (Desert Storm) or our current struggle in Iraq and Afghanistan right now. But WW 2 is definetly still a hot topic for filmmakers and so every year we get one or two WW 2 films. Some are really good (Saving Private Ryan, Band of Brothers) but others are bad or mediocre. Saints and Soldiers, a small independant war drama is in the latter. Its not horrible but it lacks any true umph and instead relies on cheap stereotypes and cliches.

Saints and Soldiers is about a small group of American soldiers who survive the Malmedy massacre (wiki it) and run off into the woods. There they meet a smart ass British parachuter who apparently has a lot of important info to tell the Allied troops involving the Germans invading a small town so he gets these soldiers to take him to the nearest outpost. They have two guns, one is suffering from dillusions after killing a roomfull of children, none of them have slept in days and they all are beat up pretty bad. And so they do exactly what he wants them to do and then the credits roll.

The plot is a little more complex than that but at 90 minutes you can only fit SO much into a movie. The acting is decent enough featuring mostly unknown actors. The only standouts are Corbin Allred and Kirby Heybourne who played Deacon (dillusional one) and Winley (British soldier) respectavley. Thats not to say the others DONT stand out its just all the other characters are carbon copies of copies of sterotype soldiers. You got the gruff seargeant who takes no crap, you got the fat loveable southern guy who has an odd smoking fetish, and you got the fuggedaboutit New Yorker with a bad attitude. You have seen all of these characters before and certainly done better but they still arent that bad.

The only redeeming factor in this movie seems to be the religious overtones which you dont really see in a lot of war movies. Deacon is a devout Mormon and most of the movie is pushing Mormon ideals and philosophies. Now I dont mind if a movie is religious or has religious overtones...but if you get really HOKEY about it and have your only character of that faith being a "Gosh golly gee wilikers...ahh dead people! I shot innocents!!!" then you have a problem.

There are SO many better war movies and I wish I had time to do more reviews today but I probably dont. So to all vetrans out there and soldiers serving right now God Bless You and all the work you do and hope you come home safe. And sorry for this movie.

MY VERDICT: AVOID IT

Email ThisBlogThis!Share to TwitterShare to FacebookShare to Pinterest
Labels: Avoid it, drama