*WARNING: CONTAINS SPOILERS, STRONG LANGUAGE AND DESCRIPTIONS OF BRUTALITY. READ AT YOUR OWN RISK* 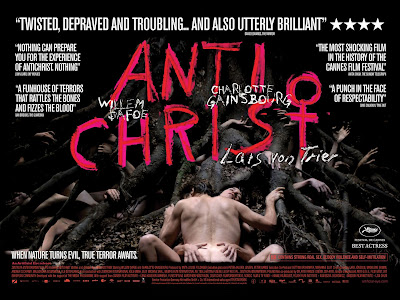 Curiosity got the best of me this time. I swore to myself I would not see this movie. One reason is I hate Willem Dafoe. He is always so dreary to watch, he mumbles to much and is just a bore on screen. Another is because from the title, the poster and the wikipedia description of the plot it looked like the most disgusting, vile, piece of trash ever put on cinema. Just from the description alone it was clear to me that Lars von Trier was sick, twisted and made this movie for one reason and one reason only: shock value. But the imagry was provoking. The trailer, albiet confusing, was interesting. All or most of my fellow LAMB's and other assorted movie goers loved it and thought it was a work of art. Heck it was even offered free on demand with my cable service. Antichrist followed me around everywhere, begging for me to watch it even after I had prematurely declared it the worst movie ever made. But finally I decided to fold and watch it. Was I shocked? Was I surprised? Did my opinion change? Yes, yes and oh yeah.

Antichrist is almost impossible to explain as one whole movie. With the help of Per Kirkeby doing title cards, Lars von Trier divided the film into four chapters with a prologue and an epilogue. Since reviewing it together is out of the question I will review each section one by one.

Prologue:
The prologue is shot entirely in slow motion, is monochromatic and lasts for five minutes and fourty five seconds. What happens in the prologue is easy to describe. A male and female (Dafoe and Charlotte Gainsbourg) are having graphic, explict, slow, wet, shower and bathroom combined sex. Meanwhile their toddler son is playing in the other room, lowers his baby gate, crawls over to the window and falls out. Right as she orgasms, the child hits the ground dead. All this is happening while Lascia ch'io pianga from Handel's opera Rinaldo is playing at full blast. Its nothing short of beautiful. Even though the sex is essentially graphic pornography and watching a toddler fall to his death is horrific, the style, the visuals, the music...everything about it is just simply beautiful.

Chapter 1-Grief
In Grief, He and She are burying their son when she collapses and is rushed to the hospital. She is overwraught with grief, shaking violently, having horrific dreams, popping all sorts of pills and is just in terrible mental pain. He is a therapist and decides he doesn't want to pay for her to have treatment so he decides to treat her himself and figure out how to end her grief and at the same time help her get over her fears of forrest only known as EDEN, where She and her son were staying without He. He is arrogant and a bit of a meglomaniac. He talks down to She a lot and treats her with no respect but He is only doing this to get to her underlying issues. She is hysterical and He is being blunt so that he can get this over with as soon as possible. When He realizes that the only way for her to truly be cured is to take her to EDEN, He and She take a train ride to EDEN. They get to EDEN but they rest at a foxhole before going any further. We then learn She is studying Gynocide. While She is resting, He takes a walk and finds a deer with a dead baby hanging out of her uterus.

Chapter 1 is extremly well acted and well told. Dafoe, who usually lacks any spark for me is electric in this movie. He is animated but more importantly he feels like a real person. Gainsbourg and Dafoe both come off as real people with a camera following them around. Both give great and natural performances that are fun to watch. Granted compared to later chapters its not as interesting, it gives a great set up for things to come.

Chapter 2-Pain (Chaos Reigns)
Chapter 2 takes place shortly after Chapter 1. She has awoken and they venture towards the cabin. On the way is a bridge that She is totally frightened of. She closes her eyes and runs past the bridge and presumably straight to the cabin. He follows and finds that She IS in the cabin resting. Using exercises and psychotherapy He tries to convince She that there is no reason to be afraid of nature and that there is nothing evil about nature. His pyschobabble causes a rift in their relationship as She becomes more manic and grief stricken. While all this is happening the forrest appears to get darker and the acorns above the house seem to fall faster and faster. Nature itself almost seems like an evil, nihilistic being taunting them. Eventually She sleeps again and He goes walking around. While walking he comes upon a fox that is dissembowling itself. When the fox looks up it says in an evil demonic voice "CHAOS REIGNS!"

Chapter 2 is a bit slower than Chapter 1. Its good and it moves the plot along nicely but the psychobabble stuff comes off more as rude comments towards She rather than actual help. He refuses to listen and as a viewer there is a bit of a COME ON LISTEN! feeling. All in all its still a great section and the fox scene is extremly haunting and REALLY disturbing.

Chapter 3-Despair (Gynocide)
In Chapter 3 He goes looking around the cabin and stumbles upon her research and documents that she was studying for her thesis on gynocide and especially women's treatment. As he looks through the book he realizes that her writing gets less and less legible as it goes on. He then also finds the autopsy report of their son that says he had a deformed foot and that She was always putting the shoes on the wrong feet, causing him pain. When he ventures to a tool shed and finds more evil pictures and more pictures of their son, She attacks He, disrobes him and smashes his testicles. In an act of pure crazy he jerks him off until he ejaculates blood all over her. She then goes even more crazy by drilling a hole in his leg and sticking a weight inside it so that his foot is weighed down. After disposing of the wrench she walks away. He wakes up and escapes into the foxhole where he thinks he is safe. While in there, She goes bat SHIT crazy and flips out looking for him. When a crow crows and reveals his hiding spot, she gets a shovel and digs him out of the foxhole thus ending chapter 3.

Chapter 3 is brutal. Brutal and disgusting. Its one thing to smash a guys balls but to then jerk blood out of him is just vile. Even Eli Roth would get freaked out. But its extremly tension filled and some of the moments were really unsettlingly creepy and I had a few scares. Its well done like the rest just really brutal.

Chapter 4-The Three Beggars
Chapter 4 begins with She helping He back inside the cabin. She explains that he wasnt supposed to die yet but that someone needs to die when the three beggars arrive. He slowly puts it together through constellations and revists from the deer, fox and crow that THEY are the three beggars. She also reveals that she could have helped Nic (the son) but didn't because she didn't want to. Angry at this she slices off her clitoris with a pair of rusty scissors. While she is huddled up in a ball of pain and with the beggars watching, He breaks a hole through the floor, grabs the wrench and pulls the weight out of his leg but not before being stabbed in the back (literally) by She. When the weight is out she just stops fighting and looks at him. He just stands her up and strangles her to death nonchalantly. He then burns her on a funeral pyre and escapes the woods.

Chapter 4 is extremly tense with a really creepy undertone throughout. All the puzzle pieces are put together and in the end it is He that is the victor and She's reign of chaos is over. I will say the slow closeup on her while she's chopping off her clitoris is the most disgusting thing I have ever seen in my life. It was vile, it was evil to watch, but it was symbolic and well done.

Epilogue-
The epilogue is shot monochromatic and featuring the same Handel song from before but its not shot in slow motion. He is walking up the hill, eats some berries and looks down to see a bunch a faceless women (thousands) just walk by him towards the cabin while the beggars just watch. Thus the film ends.

The epilogue is a sweet finishing touch and the effect of the faceless women is really well done.

Overall its an extremly well done movie. It has a unique visual style unlike I have ever seen before. The acting is brilliantly done, natural and just feels real. The brutality is pure evil and really hard to watch. Its something never before done in a movie and it works to nail in the point of this movie even more...even if I cant figure out what the point was besides Humans are evil.

Its not for everyone and in fact if you have a weak stomach then you should NOT watch this movie. Personally I quite enjoyed it and my opinion of worst movie of all time was changed to "This is a damn good movie."