All you have to do is push the button. 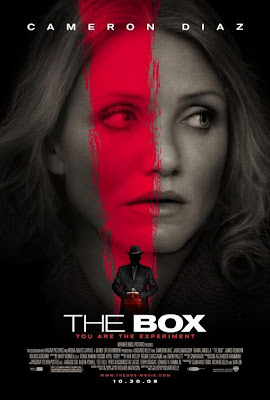 Richard Matheson is the author of many famous fantasy and horror stories including I Am Legend and Stir of Echos. He has also had quite a career with his short stories being adapted into Twilight Zone episodes, some of which are considered the best ever. One of Matheson's stories "Button Button" was made into a Twilight Zone episode titled "Button Button" and was later made into a radio drama of the same name. But in 2009 Richard Kelly, creator of cult classics Southland Tales and Donnie Darko decided to update the classic story and turn it into the thriller known simply as "The Box."

The Box is about Norma and Aurthur Lewis (Diaz and Mardsen), a couple who are trying to make ends meat with what they got but are struggling. Norma is a teacher with a disfigured right foot and Aurthur works at NASA but has failed out of being an astronaut do to failing the psyche exam. One day a small box is delivered to their front step and later in the day a mysterious man known as Arlington Steward (Langella) comes and says that if they press the button they will get 1 million dollars. But the downside is that some random person will die. Seems simple right? Well any fan of Southland Tales and Donnie Darko knows that it is never simple.

What ensues is a well thought out and enjoyable thriller that suffers a muddled and overly drawn out middle section. The beginning parts are amazing to watch and its really interesting, especially with the moral decision that comes along with the whole button idea. Its when Aurthur starts playing detective and "getting to the bottom" of things does it get kind of muddled and a little uninteresting. It makes up for it in an explosive and exciting third act. So its like great,BAD,great.

The acting is really good all around. Mardsen is extremly underrated and does a pretty good job. Diaz does well and Ive definetly noticed that she has grown as an actress in the past couple years and it shows. Frank Langella is also pretty good and has one of the best special effects Ive seen in a while.

Like Darko and Tales you either love this movie or hate it, or at least that has seemed to be the critical consensus. I dont think this is a bad movie by a long shot, enjoyable while you watch and a good interpretation of a classic Twilight Zone episode. While a poor middle act keeps it from being great I do think its an enjoyable film and at least worth a rent. Just maybe not the 9.50 at the box office.