I love you. You're my only reason to stay alive... if that's what I am 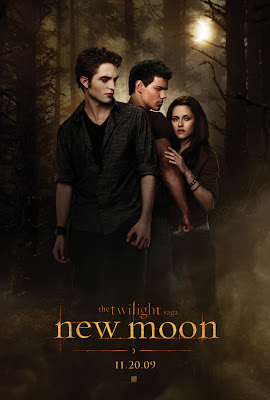 The Twilight series is the fastest rising phenomenon I have ever seen. Every girl between the ages of 10 and death have read this book series with it showing in how well the books seem to be selling. While most its mostly written with the female in mind, guys (including myself) have read the series, sometimes numerous times. I cant say Im a fan of the book series but I know the canon and I know the characters and so Im not in the dark like most people who dislike Twilight are. Its nothing against the story itself, its actually kind of sweet; but the constant emo moping and dreading along with the estrogen levels at ludicrous levels and the bad editing (not Meyers fault), I just havent been able to truly LOVE this book series like other people have.


Needless to say like all the big book series with a devout cult following (especially here in WA) it HAD to be made into a movie. And I'll write a seperate review for it but the original Twilight was BAAADD. Whether it was the low budget, the crappy director, the horrible special effects, or Edward's glitter, it was a low budget snore fest even for me, a reader of the books. But I will say Kristen Stewart and Taylor Lautner (for what he had) did a good job in the movie and although looking like a crazed stalker with steel wool for hair, Robert Patterson wasn't bad either. I would definetly have to say if they had a bigger budget and more time it could have been good but as it stands it isnt.

Now we have the next highly anticipated chapter in the Twilight saga "New Moon." New Moon is NOT a good movie. Its borderline so bad its good/funny. I really tried to like it, considering it changed most of what I hated about the first one, but this one just did NOT click for me.

If you dont know the story....actually screw it...Im not going to tell the story because if you are seeing this movie you already know the story or dont care cause you are trying to appeal to your sister/girlfriend/wife/cousin and get in her good graces by taking her to see it. But basically if you didnt already know.

Bella wants to be a vampire
Edward no like
Edward leave
Bella sad
Bella get close to Jacob
Jacob werewolf (GASP!)
stuff ensues...

Trust me there is a lot of filler and "stuff" in this movie. Its two hours and ten minutes long, eight minutes longer than the original and while I appreciate them putting a lot of effort into crafting a story, its roll your eyes bad, sometimes laughable and just not enjoyable.

I will say its one redeeming value is that its done MUCH better than the original. The effects are good, Edward isnt as glittery, the action is cool and overall it feels like a much better done movie and way better directed movie.

Saying that however, New Moon is NOT a good movie. But honestly if you are a fan you dont care what I think. Heck you have probably seen it four, five times already. But I guess since my opinion does kind of count I might as well give it.

MY VERDICT: AVOID IT

Email ThisBlogThis!Share to TwitterShare to FacebookShare to Pinterest
Labels: Avoid it, kids