I guess we should feel some sort of guilt, but she broke the cardinal rule; never f**k with people who handle your food. 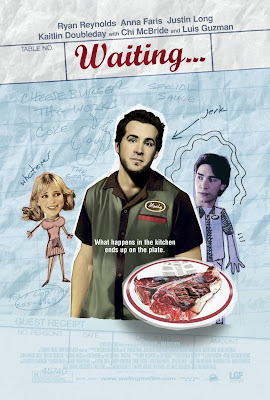 The story is Seinfield esque as it really doesnt have a plot. Its just one day in the life of the staff of Shenanigans. The story mostly focuses however on three main people: Monty (Reynolds), Mitch (John Francis Daley) and Dean (Long). Monty is showing Mitch the ropes while Dean is contemplating his life and his career. It all leads up to an afterwork party that is really hillarious to watch.

Its rude, its crude, ball sacks and womans genetalia are shown, food is dissassembled and destroyed into something disgusting and the F word is used almost every sentance. But underneath it is a heart with great comedic timing. Although the plot is a slow burner and nothing really happens, its still a pretty well told story in the time given.

Waiting...has cult classic written all over it and even if youve never seen it you have probably HEARD about it. Its disgusting and crude but hillarious till the end. Worth at least a watch.