You're like the Morecambe and Wise of the thievery world, but even they went off the boil after a while. 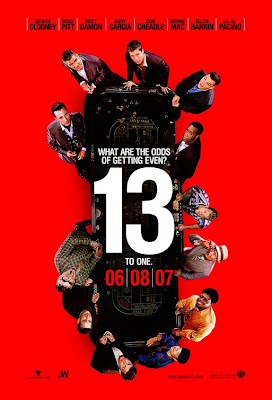 First there was 11, then 12 and now finally 13. Sure there was never a 1-10 but 1-10 is an ovverated number series for a movie. If you wanna leave an impact, start with 11. Oceans 11 was a modern day remake of an amazing 1960 rat pack movie (Frank Sinatra, Dean Martin ect) starring all the major stars, at the time, of 2001. George Clooney played the crafty Danny Ocean with Brad Pitt, Matt Damon, Bernie Mac, Elliot Gould, Casey Affleck, Scott Caan, Eddie Jemison, Don Cheadle, Shaobo Qin and Carl Reiner as the Oceans 11. Andy Garcia was the big villain and the owner of the casino.

Two movies later they are still going strong with the third and final movie. They even added two more Eddie Izzard and even Andy Garcia, who had alternative motives but thats a different story.

Saul Bloom (Reiner) has just lost a lot of money thanks to hotel/casino extrordinaire Willy Bank (Al Pacino in a great villian role). Saul is left in shock and so its up to Danny, Rusty and Linus (Clooney, Pitt and Damon) along with the other guys to get back at Banks and end his career.

Oceans 13 is a major step in the right direction from the subpar Oceans 12. The characters are livlier, the heist is much more inventive and its just a lot more fun to watch in general. It still doesnt live up to the original's greatness but for what the cast and Soderbergh had to work with I must say it was pretty good.

If there is an Oceans 14 then hopefully the crew can reach the greatness of 11. But if 13 was in fact the finale, then its a great way to end a trilogy of one of the greatest ensemble movies ever made.