Do you know "All People That on Earth Do Dwell?" 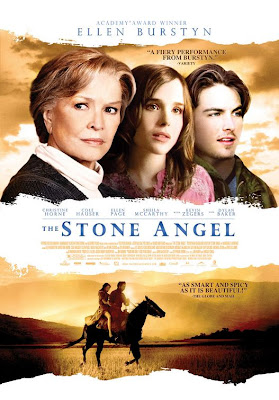 I dont know a lot about (or aboot) Canada really but one thing I do know is that if you go to college or high school in Canada, chances are you were forced to read this book for your english class. Most people I know who've read it says its dreary, sad and boring. Personally I think its a bit too feministic for my taste but it is still a good book nevertheless. So as per usual with good books "The Stone Angel" was turned into a movie featuring mostly (with the exception of like two or three actors) Canadian actors, written and directed by Canadians and shot IN Canada. So what came aboot this picture? Well apparently it was a big award winner and everybody loved it...in Canada. Over here people really didn't care and most of the people who did see it were in nursing homes. But thanks to Showtime and a weird desire to see every Ellen Page movie I sat down and watched this two hour dramatic Canadian masterpiece.

The Stone Angel is essentially the story of the life of Hagar Shipley (played by Academy award winner Ellen Burstyn and Christine Horne in her first role ever). In modern times she is 90 years old, living with her son and daughter in law (Dylan Baker and Sheila McCarthy) and being forced into a retirement home. Not content with going to a retirement home Hagar ventures off to find lost memories. During all of this we the viewer get to see what her life was like growing up. We see her get married to Bram (Cole Hauser), have two children (Dylan Baker is one of them but is rarely seen. The other is Kevin Zegers, of Air Bud fame). The youngest one John grows up with Hagar and meets Arlene (Ellen Page). Through these flashbacks we see the long and full life of Hagar Shipley.

The story itself is rather moving. It almost felt like The Notebook in a lot of ways. The person that DEFINETLY steals the show is Ellen Burstyn as older Hagar. She is SO good playing a fiesty, smart mouthed and grouchy old Scottish broad. She is a pain but you can see her gentle soul and how good of a person she really is. She steals the show and shows exactly why she earned an Oscar. Christine Horne as young Hagar is quite interesting as well. For someone with such little acting experience she looks like she has been doing it for years. All around the acting is quite good, even from Ellen Page, whose only in the movie for like 15 minutes.

Its a really moving picture and I definetly didnt have a dry eye after it was over. Its emotional without being over the top and hokey. Its a wonderful story of an interesting women and its one that I'd reccomend to anyone who wants to see a great movie. And if you go to Canada most people will agree that it is one of the best films ever. Or at least thats the consensus Ive got.