Sometimes clients think they want the real you, but at the end of the day, they say they don't. 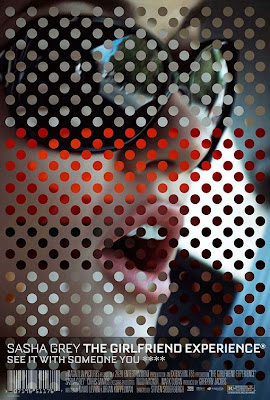 Hi I'm the movie encyclopedia and if no one else will see it, I will.

Steven Soderbergh has had quite the career. He has had mainstream success with the Oceans series, eyebrow raising films like sex, lies and videotapes and Bubble and his big hit Traffic but his latest film after the abysmal (in my opinion) The Informant is a small independant drama called The Girlfriend Experience starring pornographic actress Sasha Grey. Its shot in a documentary-esque style and runs at about 77 minutes, which is odd considering Soderbergh's movies tend to be longer. But it DOES really work for this film.

In my general opinion people who do porn tend to not do so well when they turn to regular film. Yes they are good looking but they lack any emotional depth or any talent besides looking good. I have hope for Sasha Grey. Maybe I AM just blinded by looks but her performance as Chelsea is extremly surprising. She never relies on her looks to support her performance rather than her performance support her looks. She is well spoken in this film, never "ummming" or "like-ing" but rather delivering an honest performance that has serious depth. Hopefully more people will take notice of Ms. Grey and put her in more roles. She has potential.

The Girlfriend Experience is about Christine/Chelsea (Grey), an escort who deliver's the "Girlfriend Experience" (google it kids) to different clients of different ages. She does have sex with her clients but for the most part she spends time with them, talks about current issues like the economy or the upcoming elections or the stock market, goes to movies and has dinner. The movie also follows Chris (Chris Santos), Christine's boyfriend, a personal trainer who is asked to go to Vegas for the weekend. In Chris's segments it bounces back and forth between the present and the plane ride to Vegas where they talk about current issues and the major plot points of the movie.

The movie, in its 77 minute time frame, bounces back and forth between the two of them really well delivering a well told story that is really fun to watch. Its a subtle film if nothing else. Not a lot actually happens but in that nothing there is a lot of character development and well told dialogue.

Don't turn away from this one because of its controversial nature. Its well told, well made, has great writing and Sasha Grey really shines in her first MAJOR motion picture. Definetly worth a look.
MY VERDICT: SEE IT