When I shop, the world gets better, and the world is better, but then it's not, and I need to do it again. 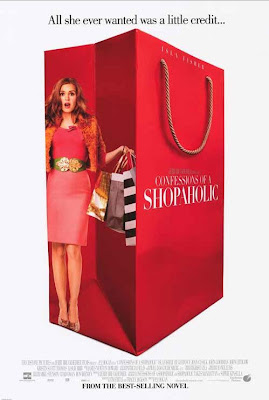 Hello I am the movie encyclopedia and if no one else will see it, I will.
Im not ashamed to admit I like chick flicks. Every guy at least likes one (usually the Notebook) and every guy has been DRAGGED to one. Well I had the displeasure of being dragged to Confessions of a Shopoholic, based on a chick lit book series by Sophie Kinsella, thinking it would be the ultimate torture. When I actually sat down and watched the movie I realized two things: 1. I know a lot more chick stuff than I thought. 2. I liked this movie. Its not an award winner, and honestly its not really THAT good, but it is CUTE and I wasnt bored watching it.
COAS follows Rebecca Bloomwood, a devout shopoholic living in New York as a journalist. She aspires to work for the big wig fashion magazine Alette but ends up working in a gardening magazine. When that job goes south and she realizes she is 9 grand in debt, she gets a job at a financial magazine.
Bloomwood is played by Isla Fisher (not related to Jenna) and she actually does a good job. Although the role isnt THAT hard to do (be really happy, girly and love shopping) she does have a few good slapstick and sight gags that are funny. Although sometimes juvinile and seen a thousand times before, they seem to work for the most part. Hugh Dancy plays her boss Luke and while enjoyable, he comes off as a bit smug. The big surprise is John Goodman and Joan Cusack as her parents. Goodman is always enjoyable to me and I just get a kick outta him. Yeah he isnt an award winning actor but he is a funny fat guy and in a world dominated by mostly skinny guys its good to have some fat comics still around. Joan Cusack is crazy as ever but is fun to watch as well.
The plot is formulatic and predictable but it never really feels that way until after the movie is over. At 104 minutes it seemed a bit long for me but then again I cant really think of any scenes that NEEDED to be cut out.
Its enjoyable while it lasts and is at least interesting to watch. If you like the books or love chick flicks then its a fine movie but for guys who are forced to watch this you wont want to hit your head against the wall while watching it. Thats something right?
MY VERDICT: RENT IT
Posted by xTJMac510x at 10:50 PM