Right, so... Pretty much touch anything, and you get your head chopped off. 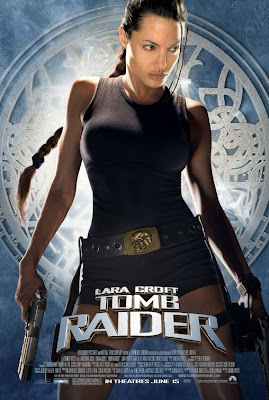 One of the "good" series was that of the Tomb Raider series. If you dont know the story of Tomb Raider its pretty simple. Lara Croft (played by Angelina Jolie in both movies) is an Indiana Jane of sorts, a brilliant professer turned treasure hunter who looks for fictional or thought to be urban legends only to find out that they arent and other hunters are after it. Its the same story in every game and so its no surprise that that is exactly is the plot of this movie.

The one really good thing about this movie (besides Angelina Jolie..and not her acting) is the action. Its something Jolie does well. All of her action movies are jam packed with guns blazing action, excitement, style and big explosions. Tomb Raider is no different.

The acting is honestly pretty laughable. The only two good acting performances are from Jolie and Daniel Craig. Everyone else seems either too melodramatic, over the top or just cheesy beyond belief. Its really too easy to make fun of honestly. But Jolie makes up for it and Craig...well he does good but I dont know...there is only so much suave I can take from Mister Bond. There is only so much of that steely blue eyed anger I can take. But he does good enough.

If you like Angelina Jolie or action movies with a Indiana Jane esque twist than this is probably the movie for you. Honestly though I reccomend the sequel with Gerard Butler.