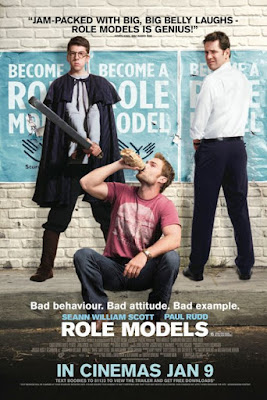 The more comedies I see nowadays the more I realize how good Paul Rudd and Jane Lynch really are. Lynch has a pretty good spot on the Fox hit Glee as the coach, but Paul Rudd has been on a comedic role with movie after movie, each being a total hit. Add to that mix a comedy film legend Sean William Scott (Stiffler...nuff said) and throw in McLovin in his natural nerd habitat as well as a smart mouthed little kid named Bobb'e J. Thomspon and you got a work of comic brilliance.

Role Models is an extremly funny and quotable film from writer/director David Wain (The Ten, The State, Wet Hot American Summer) about two energy drink spokespeople Wheeler and Danny who (Scott and Rudd), after a rough day at work, have to do 150 hours of communtiy service or go to jail for 30 days. So for their community service they join the big brother program Sturdy Wings, led by Gayle (Lynch). Wheeler gets stuck with a smart mouthed little kid Ronnie (Thompson) while Danny gets stuck with a LARPer (Live action role playing) Augie Farks.

Its a crude and raunchy comedy but unlike a lot of other comedies like it, Role Models has a genuine heart and great character development. As the movie goes on you learn more and more about who these people are and why they are the way they are and by the end you see a big change in everyone. Its the heart and genuine good moral values and lessons that are taught in this movie that make it stand out. Between the fart jokes, sex jokes and lots of language lies a true comedy gem.

If you like to laugh from the start of a film to the end of the film then you really need to see this movie. From 30 seconds till the end credits I had tears in my eyes I was laughing so hard. This is one you cant miss.